Would the name of Victoria Barber ring a bell to you? Probably not. How about Joseph Badame? Unless you have the eidetic memory of 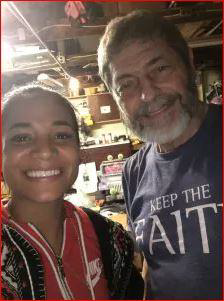 an alien who remembers every word after reading a small story in the Washington Post, I doubt it. The connection between these two total strangers is hurricane Maria and Puerto Rico. No, it’s not about two stranded people falling in a romantic relationship in a disaster. It’s about true love, however – the love of neighbors and mankind.

After hurricane Maria’s ruthless damage on the 4 million fellow Americans in Puerto Rico last week, a lot of private citizens and organizations on the mainland felt that the federal government was not doing enough. They sprang into relief actions themselves. Big and small, they did what they could.

A young couple in Florida with the names of Victoria and Anthony Barber had a unique idea. They drove around in their food truck and asked people to donate food for PR. Then they met Joseph Badame. Mr. Badame was about to lose his home in Florida in a financial bind just as the Puerto Ricans already did in a horrific storm. He is an architectural engineer and survivalist, with emphasis on the latter. He and his wife built a humongous home with 8,000 square feet of living space and a huge basement. Over the last 15 years they had stocked 80 barrels of food and survival necessities, each weighing 360 pounds. That’s enough food and basic supplies to last a couple of towns for a few days. His wife died a few years ago. He had a big mortgage on his house, which he had difficulty paying in time for a while. Finally the bank did not want to deal with him anymore. They were foreclosing on it. But they wanted nothing to do with 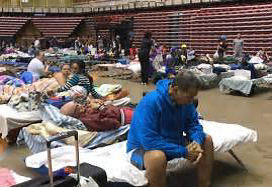 the “valuable” survival food and stuff on the bottom of the house. Just cleaning out and throwing away all those barrels would have cost him thousands of dollars, if not more.

Then Mrs. Barber and Mr. Badame met, and it was a “match” made in heaven!

If you want to read all the details about this bitter-sweet story, click below. (If you have problems opening it, try copy and paste it to your search engine.)