Last week my friend Simon sent me an old photograph. It’s the class picture of Form 1C (grade 7), Wah Yan College, Hong Kong, 1967. Simon and I were there together with thirty-eight other clueless kids, and one very attractive room teacher, Ms. Cissy. Half of the class was under five feet tall. Snow White would have no trouble finding seven hard-mining dwarfs.

Ms. Cissy had the smarts of a child psychologist. One of the subjects she taught was Western History. One time 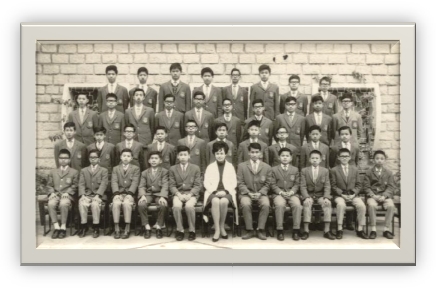 she gave another class of the same grade a test, which had only one question in it. The next day it was our turn. I figured she wasn’t dumb enough to give the same question twice, so I just studied the other areas the night before. You guessed it: It was the exact same darn question in our test!

During the test, for half an hour I tried to say something out of nothing like a skillful lawyer. She would have none of that. The verdict was inevitable; I got a failing grade. When she returned my test a few days later, she said something like: “You didn’t think I would do that, did you?” I deserved it, Ms. Cissy.

In that picture, in the second row from the front,, the first kid on your right is Philip Kwok. Philip was a good student – well-groomed, quiet, diligent, always did his homework. He probably never “prepared” for Ms. Cissy’s tests like I did. Philip had good grades and went on to study at the prestigious Hong Kong University and earned triple majors in fatherhood, husbandhood and taxation, in that order.

Philip is in a hospital, struggling with serious stomach cancer now. After all these years, he’s the same mild-mannered, gracious kid I used to know. In the face of threatened health, he continues to maintain a scholarly and composed character like a true gentleman.

P.S. If you are a friend of Philips and you are going to visit him in the hospital, will you deliver a hard copy of this story to him please? If it brings a small smile to his face, it will be worth the effort. Thank you!