I imagined this the other day. I am invited to a high school reunion. Since I can’t sing or dance, I volunteer to do something called an insult comedy. Out of reluctant courtesy from the organizers, I am given five minutes for my gig. Bravely I stand up in front of my old friends and their lovely spouses, and I say:

“My name is Chan the Man. I call myself that because nobody, I mean nobody, in our class of 160 kids, has screwed up as much or as often as I did in the last 50 years . Now you may ask what I did that was so bad. I can’t tell you, not because I don’t want to, but because I can’t remember. I just know I did some real bad things. I think my doctor used the terms “Alzheimer’s” and “Weltschmerz” to describe it. That I can remember because I heard it just last week.”

That was a fantasy I made up, trying to make you laugh. So please be nice and gentle, do give a chuckle or two before I get off the stage. 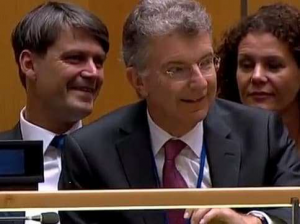 The following instances are not made up. They happened in real life.

(1) A clown with the name of Donald Trump said in front of the United Nations last week: “In less than two years, my administration has accomplished more than almost any administration in the history of our country,” He bragged to the world leaders at the U.N. General Assembly. “So true,” he added for emphasis. The audience laughed instantaneously.

(2) A few days later, the same joker told everybody in a press conference that somebody sent him a letter which was “a beautiful piece of art.” He went on to say that the writer and he had “a very good relationship. He likes me. I like him.” I think he’s hinting a soon-to-happen romantic date between those two love bugs. He was referring to North Korea Dictator Kim Jong-un.

Darn, I wish I was that good at making people laugh without using tongue-twisting German words.