The title of this article is not a rhetorical question; I really have my doubts. At the least, are some of us born evil? 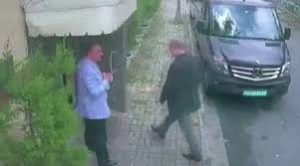 Last week, a reporter and columnist for the Washington Post, a prominent US newspaper, disappeared after visiting the Saudi Arabia Consulate in Istanbul, Turkey. His name was Jamal Khashoggi. I used the past tense “was”because it is believed that he is dead. The Saudi government initially said he left the consulate by his own free will. They even had someone walk out of the consulate wearing Khashoggi’s clothes touring around the blocks. (They forgot to change the body double’s hair and shoes.) Now the official but ever-evolving spin from the same government is that there was a physical fight in the consulate which ended in his death.

Khashoggi was 60 years old, a Saudi national and also a permanent resident in the US. He considered himself in self-exile living in the US. He worked for the Washington Post and wrote mostly on topics of how authoritarian, anti-human rights, and corrupt the Saudi kingdom was. He made his trip – his last trip as we know now – to the Saudi Consulate in Turkey to get some papers so that he could get married. This overt reason for him to go there may or may not be what he truly had in mind, which the outside world may or may never find out for sure. But if you are “famous” for being a thorn on the sides of a certain dictatorship, that may be a good “reason” to be purged, at least in the eyes of that government.

The Turkish government, under the leadership of its president, Recep Tayyip Erdogan, who is not exactly a big fan of the Saudi kingdom, had some gruesome details on the murder of Khashoggi. They reported to the public world that at least a team of about 15 Saudi assassins flew in Istanbul a day or so before the target’s arrival. They were all shown on Turkish video of entering the consulate. Turkey also said they had evidence that Khashoggi was tortured by having his fingers cut off before he was killed by beheading. According to the Turkish government, the victim’s body was butchered, dismembered, brought out of the consulate, and disposed of in the woods by some local Turks who worked as accomplices. The remains have not been found. How did the Turks know all about this? Another mystery, obviously.

I am quite sure the Saudi king, Salman bin Abdulaziz Al Saud, and his son and heir-to-the throne Mohammad bin Salman will continue to distance themselves from the murder itself. Even Donald Trump, who just a few months ago exulted in selling Saudi Arabia over 350 billion dollars of US weapons, and said he liked the absolute monarch’s family because they paid 40 to 50 million dollars for the apartments he sold them, seemed to be supportive of their “innocence”for a few days before he said that the Saudi cover-up was “bad,” when the evidence and the outcry around the world were too damning.

Somebody, I cannot remember who, said that when you are making omelet, you have to crack a few eggs. It would be funny if you are not cracking open somebody’s head. It would be cute if you are not linking a king and a prince to killing one of their own citizens abroad. To make it more repulsive, we are talking about premeditated, wait-in-lying murder in a consulate.

My deepest sympathy goes to Mr. Khashoggi’s fiancé and their families. I did not know the name Khashoggi before his murder was reported by the media. Neither have I read any of his columns in the Washington Post. So I cannot say what he did or did not do to the Saudi monarchy to deserve a slow and horrific death like what was reported. In my book, nobody, not even those waiting on the death row, deserve such cruelty. Only the devil would order this kind of execution and enjoy it.

This brings back my opening question: Are some people born evil? That seems to be a good explanation, doesn’t it?