If the word “normal” is defined as usual or ordinary as most dictionaries do, then a stretched argument can be made that hate is normal because it happens so often and so much.

A few days ago a young man went into a church in South Carolina with a gun and killed nine people. The gunman was white and all the victims were black. There was no indication that the shooter knew any of those people he killed. The suspect, Dylann Storm Roof, said that he wanted his action to incite a race war. Let’s respect the law and agree that Roof isn’t guilty until proven. But what was in his mind when he opened fire?

He could be (1) insane, (2) that he really hated dark-skinned people, so much that he murdered a number of them, or (3) driven by some other legally excusable reasons that some clever lawyers are going to make up.

My take is that this is a hate crime and he intentionally and deliberately killed those people – who were total strangers to him – because they all looked more African than European, which he couldn’t stand in his cauldron of boiling detestation.

Popular comedian Jon Stewart got it right. (Stewart has light skin and is commonly believed to be of Jewish descent.) He said that while we Americans worry so much about foreign terrorists we should also look internally at ourselves. Some of us can be as heartless and horrible as ISIS members.

We could metaphorically say Satan spilled its venom again last week and caused this tragedy. But let’s be nice for once and not blame an innocent animal like the slender snake for this heinous crime. The evil is in us humans. We are the devil. All people, black and white, brown and fair, you and me, need to learn to accept ourselves, and others. Hate only begets more hate.

My good friend MP is a kind and spiritual person and she believes that God made the universe in such a way that there is God himself and the devil, there are angels and demons, and there is Ying and Yang 陰陽. In other words, a designed balance. So if love is Ying, is hate Yang –opposite mechanisms of equilibrium?

As far as I could see, the world is never going to be perfect. Some people will always hate some other people, hate some other things. That’s a given fact in my book. But we don’t have to throw in the towel and give up. We CAN make it a little better. Yes, I believe improvements in human relations can be made by ordinary people like you and me.

May I suggest that we start with our immediate environments: our work place and our own neighborhood. Have you been avoiding at work a certain group of people, whether they be another race, another gender, another age group, or another national origin? Are you game and brave enough to invite one or two of these “oddballs” out to lunch once a month? People you’ve had lunch with are almost never rude to you. Call it bribery if you want to. But it works. (I don’t agree it is bribery; it is positive sharing of food and our humanness.)

In the morning, when you leave for work, and at night when you come home, do you say hello to your neighbors? Did you discuss how hot and dry the weather had been lately? Did you ever ask them how their kids were doing at school? How their basketball team fared lately? Have you ever invited them over to dinner or to a Labor Day barbecue?

The possibilities to mingle and be friends are endless. No, not every new acquaintance you make will soon confide 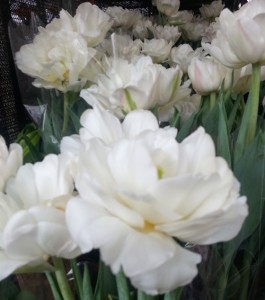 to you their marital problems, or you to them. But I assure you, eight out of ten times, they will reciprocate your courtesy and ask you and your family to their house and have dinner with them. Voila, you just made your life and theirs so much more fun!

Hate, may I say, is like the common head cold. Its germs are always there, waiting to come out to sicken you. But with a little effort and common sense, you can control it. With perseverance and practice, you may even eradicate it from your own mind someday.