My long-time friend LC, who has very sharp eyes and who happens to have lived in New York for a long time, where the famous West Point Academy is located, added the following useful information about military colleges in the United States:

“In addition to the undergrad military academies there are graduate schools and even a medical school (Uniformed Services University of the Health Sciences (USU)). They are free.”

That’s correct; thank you, LC! And I think USU also a dental program as well as one in nursing. Additionally, although I am not 100% sure, that after military college, if you go to a law school, the federal government will also pay for it. It just means that you will serve in the military 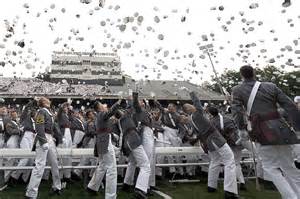 afterward for a long time. As far as I know, there are no law schools that are run by the military itself. But again, the Defense Department will pay you to attend one. Interestingly, military lawyers are called JAGs (Judge Advocates working under the Judge Advocate General). That piece of otherwise obscure military lingo was made quite popular by a successful TV series called JAG running from 1995 to 2005. Remember the very handsome faces of David James Elliott and Catherine Bell?

For the benefit of international readers who are not familiar with how schools are called in the United States, here is a quick run-down on the terminology:

Kindergarten – 12th Grade: Most people just say “K to 12.” Kindergarten is considered part of grade school. All teachers for K-12 classes must possess a bachelor’s degree or higher qualifications, and a teaching certificate issued by the state where the school is located. It’s funny: A Nobel laureate may be hired to teach college (university), but that smart person cannot teach K-12 without a teacher’s certificate. Mo Yan 莫言(real name Guan Moye 管谟业), a recent Nobel winner in literature from China, can teach in any American college, but he cannot legally teach K-12 kids basic Chinese writing, or any subject for that matter.

Junior College: A two-year college covering the 1st and 2nd year of a four-year college curriculum. Sometimes it is called a city college.

College/University: A four-year college. It may or may not have a graduate program.

Graduate School: A program upon the completion of which a student is awarded a master’s degree or a doctorate degree. Sometimes it’s also referred to as a “post-graduate” program – confusing, isn’t it? A person enrolled in this program is called a “graduate student.” In this country, if you want to be a physician (MD), dentist (DDS), pharmacist (PharmD) or a lawyer(JD), you have to finish (graduate from) college first before you apply to these so-called professional schools.

There are minor variations from what I listed above. If you know of anything worthy of discussion, by all means write me.