A few days ago my friend M introduced me to a Japanese film called “Sweet Bean.” It is indeed a sweet, albeit slow-tempoed movie. So it’s not “Indiana Jones and the Temperamental Treasures,” but more like “Lady Lucy and Her Mysterious Afternoon Tea” type of story. I liked it. It’s got an after-aroma lingering in your palate at the end of it. You may want to check it out on Netflix too.

Just to give you a teaser of a synopsis, it’s about a woman in her seventies looking for work and a middle-aged man 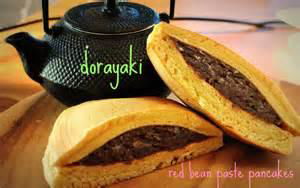 who owns a small, hole-in-the-wall eatery that sells only one item of food: dorayaki (a pancake sandwich with sweet red beans inside). The man advertises to hire a helper. The woman applies for the job. She is turned down because the man thinks she’s too old. He changes his mind when she gives him a sample of red bean paste that she made herself at home. He takes a taste of it and decides it is way better than any red bean paste he has ever tried.

As the story unfolds, you will find that both the woman and the man have secrets and hidden baggage. How do they reconcile and resolve them?

In the Eyes of Red Beans