The next week after class Eddy asked Jenny to go to Ronan’s again, and she did. I would be disappointed if you didn’t ask, she told herself.

The week after that she assumed that they would do the same, except this time he asked her to go to Ichi-ban, a Japanese restaurant in town. She was glad for the change because the food from the limited menu at Ronan’s was getting a little bit old, and she really liked this new suitor. He was not particularly good looking, but he was unassuming, mild and gentle in manners, and he seemed to know a lot of little things. He was also a kindly man. Twice at Ronan’s he said hi to his homeless friend Jack on the sidewalk and helped him out with a couple of dollars. Best of all, he was funny, a good talker, in a non-gossipy kind of way.

He must like her a lot too. She seemed to be an empathic type of person. Being an emergency room nurse fitted her caring temperament well, he thought. And she was pretty. Not flashy, just pretty. That didn’t hurt.

Over sake at Ichi-ban, he asked her if she wanted to take a one-day road trip to Mendocino over the weekend. She again said yes.

He picked her up at her house at 9:30 that Saturday morning. He bought two large lattes from Starbucks on his way there. She packed some fruit, cheese and other snacks for breakfast on the road. They took the long but scenic route. From Hayland going west to Half Moon Bay, it was about 40 miles via Highway 92. Then it was straight up north to Mendocino on Highway 1. That leg would take them about 4 hours. Shortly after they turned onto Highway 1 in Half Moon Bay, they saw a couple of small planes flying along the coast line above the Pacific.

“Look at those 2 planes. It’s Half Moon Bay. They have a small airport here.” Eddy said.
“I didn’t know that,” Jenny said.
“I looked into it once. I always wanted to learn to fly, to fly into the clouds.”
“Why didn’t you?”
“Well, number 1, I couldn’t afford the expensive lessons. Two, with a heart attack and retinal detachment in my medical background, I literally don’t have the heart or eyes for it anymore.”
“But you still like looking at planes.”
“Yes, I do very much.”

Highway 1 is considered by many motorists as one of the most beautiful roads on the west coast. On this day it didn’t disappoint. The weather was nice and balmy. With the temperature outside at about 70 degrees F (21 C), clear blue sky with occasional white clouds overhead, and the sapphire Pacific water on their left, even the rugged black rocks jutting out of the aqueous surface looked deceptively inviting with the white waves gently slapping at them. The drive was long in time and distance but it felt quite short and comfortable as they were pampered with one beautiful view after another. Thanks to Eddy’s reliable old friend, the 10-year old Honda, it took them past places with names like Pacifica, San Francisco, Marin, Muir Beach, Five Brooks, Point Reyes National Seashore, Bodega Bay, Sonoma Coast State Park, Sea Ranch, Little River, and finally Mendocino.

When they drove by the sign of Point Reyes, Eddy said, “They even have a place named after you.”
Jenny: “That’s cute. But my biological name isn’t Reyes. I’m adopted. My adoptive parents told me my bio father’s name might have been Tito. I’m not sure, but it doesn’t matter. I loved my parents dearly. I am proud to be a Reyes.”
“I thought that was your married name.”
“No, I never changed my name after I got married. Good thing I didn’t now that I am divorced.”
“Ditto.”
“Ha, easy for a man to say. I always think it’s a sexist thing that a man would want his wife to follow him around with his name.”
“I agree. Incidentally my grandfather was adopted too. Back then it wasn’t proper to ask your parents about your genealogy. So I might or might not have been a Kwan either. And you’re right. My great grand-parents loved my grand-father and he loved them. That’s what counts.”

The town of Mendocino is big on its ocean and river views despite its small population of about 1,000. On busy weekends, tourists and vacationers probably out-number its permanent residents.

One notable piece of history about Mendocino is not a natural beauty, but the fame it received from a 1978 movie called Same Time, Next Year starring Ellen Burstyn and Alan Alda. A fictional rental cottage named Heritage House was built there overlooking the Pacific Ocean where the male and female protagonists would have their annual rendezvous.

Since Jenny and Eddy didn’t know when exactly they would arrive at Mendocino, they didn’t make reservation for lunch. As they passed Little River, which was about 2 o’clock in the afternoon, and about 30 minutes away from Mendocino, Jenny looked up Yelp on her smart phone and found a restaurant called Trillium. When they parked in front of it, they saw a small, boutique type of eatery, just the kind of cozy place they liked. And they were both quite hungry. So they locked the car and went in. 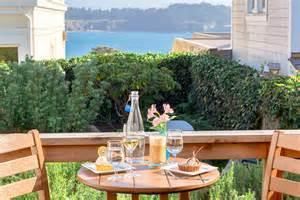 After they were seated by the hostess, Jenny excused herself to go to the ladies’ room. When she came back, she was greeted with an inscrutable smile on Eddy’s face.
“What, did I mess up my eye lashes?” She knew she didn’t.
“You look beautiful, Miss Reyes,” he said it as his eyes directed her attention to a napkin on her side of the table. Words were newly written on it, she could tell.
“That’s for you,” he said.
“You just did that?”
“Sorry I only have a blue pen, not a pink one….”
She wasn’t listening to his answer in her eagerness to sit down to read what was scribbled on the white paper napkin.

“Hope it didn’t spoil your appetite,” Eddy said.
Jenny did not say anything. She got up, walked up to him and gave him a quick peck on the cheek. “Now you’ve really messed up my mascara,” she was smiling and sniffling at the same time. The old couple at the next table were looking at them in awe and wonderment. Then the man got up and kissed his wife. The old lady said, half-way looking at her husband, half-way at Eddy, “Thank you, love.”

They both liked seafood. Jenny ordered swordfish, he fettuccini with shrimp and scallops, so that they could share. Toward the end of their meal, by which time it was almost 3 o’clock, they were having coffee and cheesecake. The old couple next table had already left. So did everybody at that corner of the restaurant. Eddy leaned over and said in a whisper,
“I’m being brave here, Jenny. I want to ask you something, but please be honest with me, and it’s ok to say no if you don’t want to do it.”
“You’re not proposing, I hope,” Jenny’s face pinked a little and she was laughing at what she just blurted out. But that was the thing about Eddy, she gave herself the excuse: I don’t have to be coy in front of him.
“No, no, no….” Three nervous nos from Eddy.
“What then?”
“I was wondering, if you like it enough here to want to spend the night.”
“Oh,” Jenny was thoroughly blushing now.
And she said, “Y-e-eah, but we didn’t pack anything.” 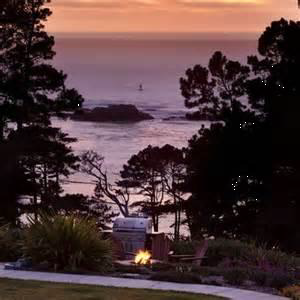 “I’m sure we can find a convenience store around here and get tooth brushes and what not…. So I take it as a yes?”
When the waitress came back to refill their coffee, he asked for a hotel recommendation. She said, “We have a few rooms upstairs too. They are not four-star luxury rooms, but they’re clean and comfortable. If you like, I can check if there’s one available for … just one night tonight?”
“Yes, that would be great!” Eddy was so excited.
She returned in a few minutes and said there was one room available although it did not have an ocean view.
“We’ll take it,” Eddy said.
“Good, just check with the counter person when you’re finished with your lunch here. I’ll go and tell her to hold it for you. Take your time with your dessert.”

As they were checking in at the hotel counter, Eddy asked the clerk:
“Is there a convenience store within walking distance where we could get things like tooth brushes and unmentionables?”
“Underwear,” Jenny added.
The initially confused young clerk was trying to suppress her chuckle when she handed them the room keys. She told them with directions there was a store just a block away.
“You expect a hotel clerk to be a poet?” Jenny jokingly reprimanded Eddy as they left for the store .
“Well, I once knew a house painter who had a Ph.D. in Philosophy.”
“A deep-thinking painter, was he moody and sad like Vincent van Gogh?”