Ben was a Hong Kong classmate of mine more than forty years ago. He now lives in California. In mid-October, he suffered a severe heart attack and collapsed in the parking lot of a restaurant. He was rushed to hospital, where 10 doctors took 10 hours to perform an aortic dissection surgery. By November 3rd, Ben had already been unconscious for 18 days since the surgery. All his friends were very sad. I wrote the first verse for Ben and for the 100 classmates that were email-reachable. 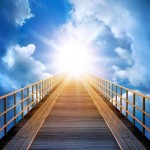 Miraculously, he woke up on the November 5th! Yes, praise the Lord up there! Ben woke up, then gradually sat up, stood up, and cheered up. (His insurance company paid up. It’s probably a US$ 7-figure medical bill, not by Obama care.) He was discharged from hospital half a month thereafter. On the next day home, he briefly responded to the first verse above:

“ I knocked at heaven’s gate, and they turned me away ”

… thus sowing the seed for my second verse  below. 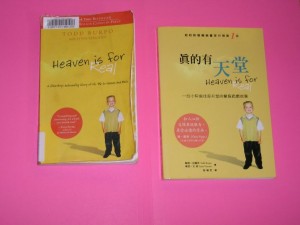 Ben’s return trip reminds me of a book called “Heaven is for Real” that I read in 2013. I enjoyed it. Thanks to a friend for the Chinese version. Many people in Richmond Hill have borrowed and read the book. The following is an introduction to Todd Burpo’s Heaven is for Real, quoted on the website of the public library here in Richmond Hill, and , from the book’s back cover:

“Do you remember the hospital, Colton?” Sonja said. “Yes, mommy, I remember,” he said. “That’s where the angels sang to me.” ….

When Colton Burpo made it through an emergency appendectomy, his family was overjoyed at his miraculous survival. What they weren’t expecting, though, was the story that emerged in the months that followed–a story as beautiful as it was extraordinary, detailing their little boy’s trip to heaven and back. Colton, not yet four years old, told his parents he left his body during the surgery-and authenticated that claim by describing exactly what his parents were doing in another part of the hospital while he was being operated on. He talked of visiting heaven and relayed stories told to him by people he met there whom he had never met in life, sharing events that happened even before he was born. He also astonished his parents with descriptions and obscure details about heaven that matched the Bible exactly, though he had not yet learned to read. With disarming innocence and the plainspoken boldness of a child, Colton tells of meeting long-departed family members. He describes Jesus, the angels, how “really, really big” God is, and how much God loves us. Retold by his father, but using Colton’s uniquely simple words, Heaven is for Real offers a glimpse of the world that awaits us, whereas Colton says, “Nobody is old and nobody wears glasses.”

Also from the book’s back cover: “Heaven is for Real will forever change the way you think of eternity, offering the chance to see, and believe, like a child.”

Note: Click here to continue browsing other writings and works of Simon Tam within this site

One thought on “A Moment in Heaven”