On New Year’s Day, I called up Miss H, one of my much respected secondary school teachers. 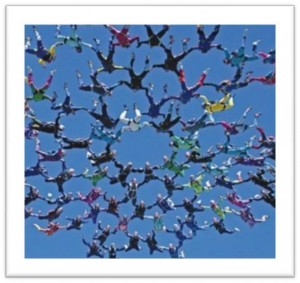 She lives in Toronto, Canada, and I’ve met her in person twice in the last forty-some years. Thanks to the wonders of e-mail and internet phone calling, we’ve kept in touch over the last few years. Miss H is one of the regular readers of my weekly mutterings who takes time to write me and comment gently and kindly on my writing and makes sure that the t’s and i’s are drawn properly.  This time on the phone we talked about her retirement, my recent heart attack, religions, and the world at large.  There was no particular agenda I had in mind when I called, other than to find out how she was and to wish her and her family a happy new year.

The next day, January 2nd, I telephoned another favorite teacher Miss T.  She also lives in Canada, in another big city called Vancouver.  I saw her briefly last time about four years ago in a class reunion dinner back in Hong Kong.  Before then it was when I left the school in 1971, more than four decades ago.  I haven’t kept in touch with Miss T much, other than bombarding her with my weekly writing over the last three years or so.  Miss T was my room teacher and English teacher in Form I in Hong Kong (grade 7 here in the US).  It was also the first year I had class instruction in the English language full time.  I told her if there was anything worth reading in my writing, the credit was all hers – and the remaining nonsensical Chinglish mine.

Although I wasn’t trying to sell my teachers Californian real estate or life insurance, there was a shared reason I called these two ladies.  I hadn’t seen or talked to them for a while and I wanted to hear their voices, if nothing else.

I can tell you this:  It really feels good talking with people you miss and care about.

After I fell very sick last year, there was a sudden urgency to find my friends – and to make sure that they were doing okay.  I did not want to wait until I had time, or until I had saved enough money, or until this and until that ….

I am repeating myself here.  I had an open heart surgery mid-October last year.  I took a nap for more than three weeks and woke up sometime in November.  When I did, I didn’t know where I was. The medical personnel did not explain to me how I got there. My forearms were strapped to the side railings of the bed. I couldn’t move. Am I in hell?  I can’t be.  The room is too organized and clean to be hell.   Although I might not have paid every dime in taxes, I didn’t murder or rape anybody in my prior life.  I don’t deserve punishment this harsh.  Am I being kidnapped? Even the enigmatic Satan himself wouldn’t want to take temporary custody of a useless wretch like me.  And I was not married to Joan Rivers whose estate was worth more than 100 million US dollars.  Either way there is no ransom to be had. No, I’m not being kidnapped. Then what is this damned place? Guantanamo Bay Detention Center?

I was terrified.  I felt like a raccoon that was snared in a trap.  I wanted to bite off my hand just to make a run to the elevator and out to the street.  The doctors had cut a hole and put a trich in my throat and I couldn’t talk.  I mouthed to everybody that walked by my bed to make a call to my children and I would pay them a thousand dollars.  Nobody took my offer.  They must really think I was crazy.

Now I know the truth.   I had seizures during surgery.  They were so violent that I bit off part of a front tooth. That’s why they tied me up for my own safety.  But they could still take a few minutes to tell me what happened and spared the patient many days of extreme horror. My cell phone was taken away from me and I was 100% cut out from the outside world. I thought about killing myself to end the misery because I didn’t know how long this torture was going to last.  I understand and I forgive the hospital staff now.  After all, they as a group saved my life, for which I am deeply grateful.

So in about two months, my mental state pendulumed from hallucinatory and suicidal to wanting to live life to the fullest, to yearning to talk and see all my family and friends.  I believe, given a choice, most of us are born to connect with each other, to be friends with each other.  The great Nelson Mandela once said that it was much more natural for a person to love and forgive than to hate and revenge.  How he maintained that faith after twenty-seven years of horrid imprisonment by a kangaroo court I don’t know, but somehow I think he is right.

Have you called an old friend lately?  It’s easy if you just put on your shades and repeat after Stevie Wonder: