“Hi, do I know you?”He asked rhetorically with a quaint smile.
“Yes and no,” she played along, “We’ve been coming to this class for a month now, give or take. My name is Jenny.” She extended her hand.
“I am Eddy. Nice to finally meet you, Jenny.” He took her hand and shook it, holding it a little longer than a business hand-shake.

Jenny and Eddy were in the guitar class at the community center in Hayland, California. The town of Hayland is on the east side of the 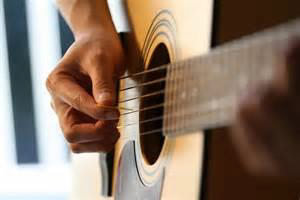 San Francisco Bay. It is a fairly old suburban location by Northern California standard, made up mostly of modest, one-story houses averaging eighty to a hundred years old. With a population of about 40,000 people, it’s considered a typical “sleep community,” comparable to the neighboring San Leandro and San Ramon.

An hour after the initial formal introduction, the guitar class was over. As the students were leaving the room, Eddy started packing the instrument and the music sheets into the case, with an eye on Jenny. Jenny seemed to sense it and was taking her time getting her stuff together. As she was walking toward the door, Eddy hurried up behind her. By then all the other students and the instructor had left.

“Jenny, you have time for a cup of coffee?”
“Uh sure, as long as you are buying,” she said.
“Haha, of course I am. Shall we drive our cars and meet at Ronan’s?” Eddy was trying to contain his excitement, although his facial expression gave it all away.

Ronan’s was a little neighborhood café half a block away. They both parked their cars in the front parking lot in less than ten minutes, his an old but well-maintained Honda Accord and hers a late model Toyota Prius C. It was almost 7 o’clock in the evening. So it wasn’t busy. They picked a small table for two people at the front window, looking out the street.

“What are you going to have?” Eddy said.
“Can I have anything on the menu?” Asked Jenny.
“Absolutely.”
“A small latte, then.”
“Good thing this is only a coffee shop, not a French restaurant ….” Eddy mused as he was walking to the order counter.

That was a good introduction. They talked about the class a little, how they both liked the instructor John who was genuinely interested in giving the adult students a good lesson and a good time, and what they were going to sing and play during the last meeting which was coming up in 3 weeks. Then they ended up having “dinner” there too. Being in a coffee shop, the choices were limited. So they both ended up having a lox bagel. That actually turned out to be pretty tasty, they both agreed.